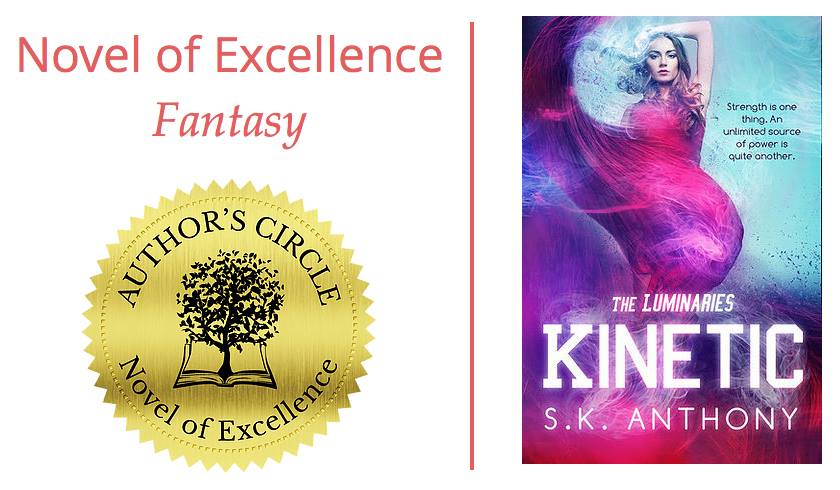 This isn’t the first time I’ve congratulated my co-host, S.K. Anthony on receiving a writing award and I am certain that it won’t be the last.

An author who doesn’t suffer from a little low confidence probably isn’t worth reading. It’s the nature of the craft, the deeply personal aspect of the creation, that makes an objective evaluation of our own work so challenging.

My first interactions with S.K. three years ago (which feels like much longer), was not as author to author. I had met her through Goodreads and, on the suggestion of my editor, I tried to hire S.K. to beta-read my third novel.

I say “tried” because although she ultimately accepted the offer, she adamantly refused to accept payment. She and these are her words, “didn’t think she could add any real value” to the work.

I recognized her eye for storytelling within the first few notes she provided.

That opinion was confirmed within the first few paragraphs of her novel Kinetic.

Urban Fantasy isn’t my writing or my reading genre, but that lack of familiarity didn’t matter in my evaluation. A writer and a reader know a great storyteller when they encounter one.

And SK’s ability to weave an intriguing plot with interesting characters is remarkable.

That nothing in her writing suggested that English is her second language or suggests that she learned it while most English-speaking writers are spending their high school days figuring out how to avoid more learning is incredible.

But, of course, like most great writers, S.K. is humble…often to the point of self-deprecating when it comes to her writing. So unlike her ability to drink wine and coffee…on those skills, she will not hesitate to tell you that she is an absolute Champ.

And she is…but her writing is pretty damn good too.

That’s not just my opinion, that is a fact.

Which is why it is a great honor to share that S.K. Anthony’s novel, Kinetic has received The Novel of Excellence Award for Fantasy.

I wrote it the last time she won the Readers’ Favorite book award, but for my friend and co-host, it is worth repeating: It is always a great feeling when great things happen to good people.

Please join me in congratulating S.K. and check out her book here.

7 thoughts on “A Writer of Excellence”