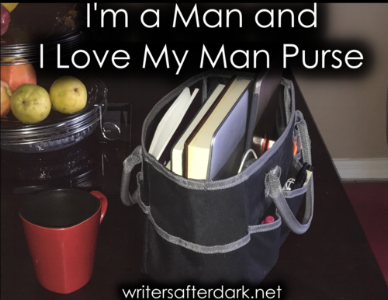 It’s true, and I’m not one bit ashamed. Well, not exactly correct because it’s less a Man Purse and more a House Purse. I don’t take it out of the house.

I went to high school and college in the 80s. We still had a fairly strict list of the things a “dude” could say and do without being called gay.

For example, it was okay to wear a “fanny-pack” if and only IF you were either hiking or skiing. Your socks could be either white or dark—no pinks, purples, or anything  “girly.” And the only thing you could shave was your face.

All that has changed, (not the fanny pack unless you’re over 65 guys) but folks from my era are still a little resistant to the Man Purse. You can carry a backpack, messenger bag, or briefcase. Anything too small qualifies as a purse, and unless you are gay (really gay), ridicule will likely follow—even from guys with a man bun and pink socks.

Which is why I got married. Well, not the only reason but my wife’s purse really comes in handy. Or SK’s bag, I’ve enlisted both.

Someone, somewhere, at some time long ago decided that because men have pockets, it is less manlike to carry a small bag. I live in Florida. I wear shorts 90% of the time.

Shorts have two small pockets. I guess you can use the back pocket(s) if you’re “that guy.” I have way too much stuff for two pockets, and multi-pocketed cargo shorts are out.

And unfortunately, unless you are a cop, a construction worker, or Batman, a utility belt is also out of the question.

Now back in the day you left the house with maybe a wallet and a key or two. Today, we have a lot more“stuff.” Keys, wallet, mobile phone at a minimum. All adding to the weight of those pockets.

For me, there are the keys, the phone, the wallet, the e-cig (or regular cigs and a lighter), the reading glasses, and the sunglasses. And that’s for the short trips. I may also need to bring my journal, pen, glass cleaner, and eye drops.

Go ahead and get all that stuff into your two pockets. I wind up with my hands filled, things rolling off the front seat of the car, and draped in two pairs of glasses. Unless I’m with my wife and then all that crap is in her purse.

But whatever. I’ll wait until the Man Purse is cool—which will obviously require some manly celebrity to start using one in public. Yes, I could just carry a backpack (but not too small). Although then I’ll be accused of acting like a 15 year older skater. Or be followed throughout the entirety of my Walmart trip by store security. Dudes with backpacks are not to be trusted unless they’re at the airport or hiking across Europe.

At home though, I enjoy the privacy that allows for my House Purse. Now you may be looking around your home or apartment while thinking, “why on earth would you need a house purse?”

I was blessed with a career that afforded me the luxury of a six bedroom, two-floor house. And while it doesn’t make sense to keep it now that the five kids are gone, we are still here.

I used to walk around from place to place with handfuls of the stuff. A writer and marketer just never know when inspiration or ideas may strike. You have to be prepared. And there are six places at home where I need to be ready.

•    There is the sitting area where I start every day.

•    There is the lanai for when the weather is nice.

•    The living room where I watch television.

•    There is one of the spare rooms where I’m working on a new video project.

And to be prepared there is “stuff” I must have with me.

What stuff, you ask, is so indispensable that I need a house purse?

If I leave the stuff around I never remember which place I last used it. And I spend half the time going up and down the stairs to get the “thing” I need.

Plus, I almost always in route with a cup of coffee, a bottle of water, or a bucket of ice (for the podcasting drinks). You need a free hand for that stuff.

A few weeks ago, my wife was going up to her office. A cup of tea and all her “stuff” in hand. Halfway up the stairs something slipped, she tried to catch it, and her now empty teacup came rolling down the staircase.

“You need a house purse,” I told her.

She agreed. Although I think she went overboard.

Seriously, I can’t tell you how much easier my life is now that I have a house purse. I’m like an Italian grandmother. That thing never leaves my side.

I’m not ashamed either. There are people, as we speak, connecting their entire homes to smart devices. Literally, folks using voice commands to turn on a light that is five feet away from them. People who are using their mobile phones and Ring to see who is at the door that they are going to answer anyway. My House Purse isn’t because I’m lazy, it’s because I’m creative.

Besides, compared to my facial care products and regiment, the House Purse is probably my least metro-sexual thing. And, sure, I could pack it all in my briefcase or backpack, but I think carrying them around the house would look kind of stupid.