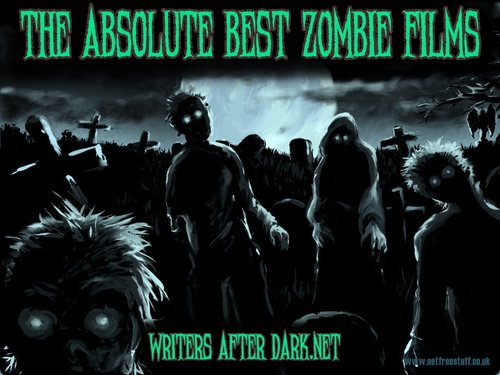 Like all films, Zombie movies run the gauntlet of great to absolutely terrible.  Let’s dispense with the most apparent arguments of “what” constitutes a “zombie.” For my treatment and for lack of a better defining term, a zombie does not necessarily require the death of the individual – infected is good enough. The speed of movement, be it fast or slow, both have their advantages, and the particular level of intelligence is negligible for me.

So as defined in my world – if it were a human being and is now a walking or running insane nightmare (although not a vampire or werewolf) I would qualify it as a Zombie type film.

I think the critical factor is the application of the word “horde” – the uncontrollable spread of the infection, whereas the former human has a hunger for your flesh or brain.

And I’m not making an argument that these films are the only “bests” out there. Just the best I’ve remembered while writing this post. If you have a gem or an opinion feel free to share.

Which is why we can argue the finer points, but I’d rather just get to the best of the bunch, but in no particular order.

The 1970 something film with Charlton Heston was my first real experience with the “genre.” Viewed at the drive-in when I was like six (wtf was my mother thinking), the movie absolutely paralyzed me. Now in truth, it doesn’t hold up so well in today’s world, but it is a classic in my book, and it is based on the classic.

The third remake of Matheson’s story (the Omega Man being the second) and undoubtedly the best of the three versions, although they may have tried a bit “too hard” and I wasn’t crazy about the “alternate ending” because they actually picked the wrong one for theaters. Again not really a zombie film, but go ahead and tell me you’d go in that damn dark building for a dog. I love my dog Zeus, but honestly, he’d be on his own in that situation.

Dawn of the Dead

The 2004 remake of the original is probably my all-time favorite zombie movie. They walk, they run, they crawl and they moan. This is just classic zombie stuff filled with all the things we want in a zombie movie including the dumb decision making we have come to know and love in all horror films.

Oh the moral dilemma of making a run for it or trying to save a loved one. I actually thought that part two of the series was better than the first. Nothing against 28 days later, I just liked this storyline better – although I still believe too much time is spent making the “army” the bad guys. In the zombie apocalypse, aggressive containment is necessary even if we know it isn’t going to work… and besides, if you’re doing the shooting, it’s a damn good time.

Night of the Living Dead

The original is after all the original. I can discount all the socio-political statements of the film and just enjoy it for what it is – a great classic. Today’s special effects, of course, outshine anything that Romero could do with this 1968 gem, but I think the camera angles more than makeup for any shortcomings.

You probably missed this forty minutes of greatness. The short film appeared on Fear.nets series called Fear Itself. The series has some great stories, but we’ll stick to the zombie topic. This one stars Briana Evigan best known for Step Up Two (okay I have daughters so I may have caught a few minutes of the movie) and it deals with a zombie outbreak on New Year’s Eve. Briana spends the entire time trying to get to her ex-boyfriend’s apartment. I can’t tell you anymore but strongly urge you to find this online and give it a spin.

Okay, not a movie, but I think this graphic novel to television series early years and this recent year deserves accolades. Sure show-runner, Scott G ruined several seasons, but we can’t discount those great first years.  An excellent story that stays to the classic zombie line and does an excellent job of raising the big zombie apocalypse question “what would I do in that situation? Or that one? Or that one?”…Answer…Shoot! Run! Shoot! Run and Run!

Diary of the Dead

Another Romero zombie movie and better than Land of the Dead. Not quite Dawn of the Dead but with the use of the camcorder (I have no idea what we are calling these things today) we get a new look on the old classic. A decent storyline and decent acting, this one is worth a look. Interestingly it stars Shawn Roberts who seems to be becoming a mainstay for zombie films as he was in this, Land of the Dead and Resident Evil.

I loved this movie. More rabies than zombies but who cares. I love the camcorder, the graphic gore and all the dumb decisions – hey folks those CDC guys left a couple of guns in the other room! The craziness and the chaos were just classic. The ending took us to a whole new place, and I really wish they did a better job with Q2, which was a real disappointment. Quarantine is well worth the watch.

A new entry from the folks over at Netflix. Some have said that Black Summer is the show that Fear the Walking Dead should have been and I agree. The series uses an interesting storytelling approach and one that provides several storylines and viewpoints. Not necessary deep nor philosophical, I enjoyed it both times I watched it.

Sure, it’s basically all the classic zombie tropes but with an interesting spin on the final solution. What really made this film unique is the cinematography. It brings the image of the horde to a whole new level. The film script is filled with nuggets of philosophy that will satisfy those of us who like a “brainy” aspect (no pun intended) to our zombie films.

I have a couple of other’s that I put in the “almost there” category for zombie/infected films. They could have been on the list, but for particular reasons, I didn’t think they entirely made the cut.

I actually loved this film. As a zombie feature, there was just a little too much light-sidedness to it for me. Perhaps if we took out the Bill Murray scene, it could have made the grade. The rules, however, were funny and accurate, the acting was great, and overall, an outstanding film. Oh and two other words…Emma Stone!

Again a pretty good remake of the Romero original and it finished pretty strong. My problem was that there just weren’t enough “crazies” for me and it became more about the “evil government plan” than surviving the pursuing horde. Yes, there were some great scenes like the car wash, but then there was the scene in the diner/truck stop where I couldn’t figure out if the dudes were crazies or just crazy.

Shawn of the Dead

Funny, funny, good storyline, excellent SFX but I’m not a comedy-zombie fan, so it doesn’t make my “great” list even if I have watched it like five times.

Great infected movie – too much army – worth the watch but not in my top-top list, but real close.