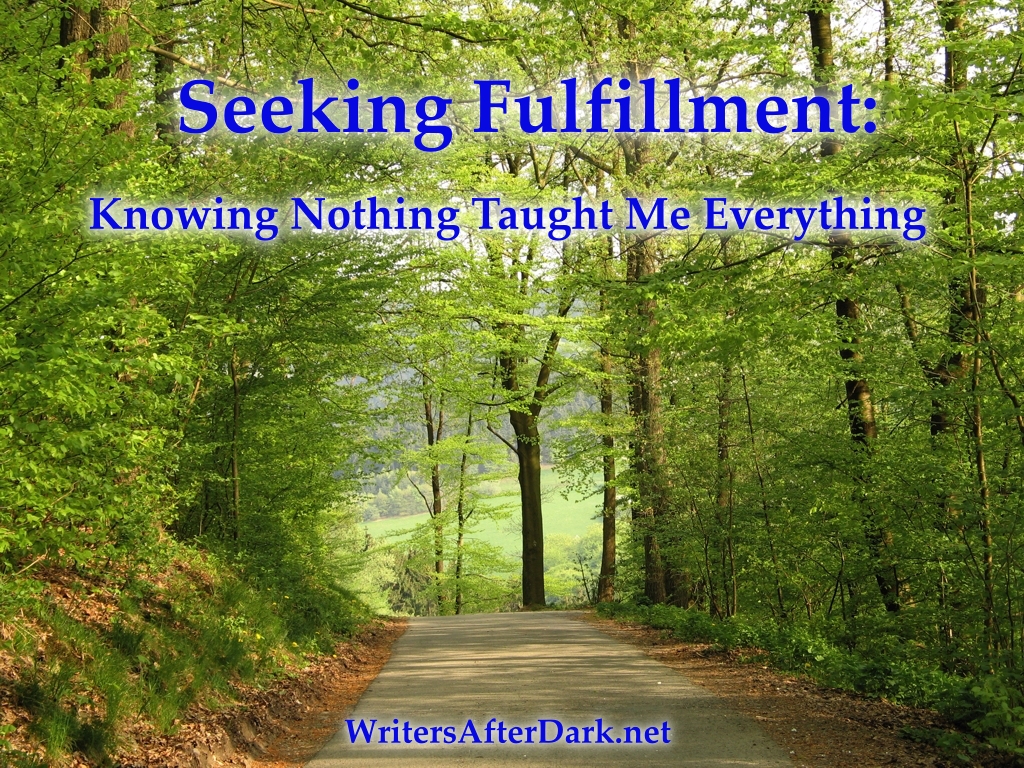 Like many folks, I’m on a journey of self-fulfillment. For a time, it felt an odd thing to be engaged in at fifty-four years old. In my youth, or at least my thirties, I believed that all would be worked out by this point in the future. That I’d be on the easy downward slope of life. Accomplishments in hand, family raised, thoughts of retirement a short walk down the garden path. After all, the then was twenty years ago, and indeed, twenty years was more than enough time and effort to arrive at the land of contentment.

Two years ago, I discovered that my life was anything but fulfilled.

I identified all of the issues: mid-life crisis, depression, a hanging-on-for-dear-life marriage, and two steps back in my career. Everything I had achieved and every hard-won victory turned out to be a mirage. And if these things had not been, or no longer were, real, then I had spent a lifetime working on nothing.

Or so I thought.

I pushed aside, or more aptly muscled through, the crisis and the depression. I said good night to all the ghosts at my pity party. And I began the hard work of rebuilding my life.

A year ago, I began a daily journal.

You’d think for a writer that a journal is something we always keep. Honestly, I never much liked the idea of putting down my personal thoughts and feelings on those pages. It seemed redundant. I already know my thoughts and feelings, so why spend ten minutes memorializing them?

I’m about as introspective as a person gets. I apply my psychology education to myself. I am a voracious reader of all things “self-development.” I’ve examined my astrological natal chart, my numerology numbers (is that redundant?), I’ve delved into the enneagram, and I’m a master Tarot reader.

Know thyself has been a life-long pursuit.

I didn’t need a daily journal for self-discovery.

But I also went back and read most of the entries in my journal.

I discovered I was lying to myself in so many ways. It wasn’t specific lies. But I know myself enough to know when I am presenting to an audience. And the tone of my entries, deliberately positive, vaguely committed, revealed something frightening.

I sensed a bit of desperation in my voice. I sensed a little too much false bravado and not enough real confidence.

The thing about it was this: I did not have a clear sense of where I truly wanted to go or who I wanted to be. Vaguely, yes, but specifically no.

Socrates said, “the only true wisdom is in knowing you know nothing.” In terms of self-awareness, apparently, I was very wise. I am grateful that I knew enough to know that I did not know the path to my fulfillment.

“I have chosen my core values. I wrote out my vision. I was being a good parent to myself. I had killed the ghosts that haunted my past.”

I had, in fact, done all those things—pretty words on pages of sophisticated journals.

But in reading the daily journal, I didn’t identify with most of it. The stuff I had written didn’t truly resonate with me. It was all a beautiful to-do list that anyone could be proud of, but it all was merely a formula to rebuild the very mirage that had evaporated a few years back.

My core values were a good set. But were they mine? Were these the actual building blocks of my character?

My vision was excellent. But was that true to me and my happiness, or was it just the constructs of what “success” might look like?

I was being a good parent to myself, except for the accountability part.

Awareness is a fantastic thing.

Once I recognized these things, all the small steps suddenly became a giant leap. (In my books, I try to avoid letting my characters always recognize things and suddenly doing things—but in this case, both are true.)

It took me about a month to rework my life plans.

I am no longer so foolish as to think I have a final product.

What I am, however, is more honest with myself than I have ever been. I don’t let myself off the hook so quickly for the hard stuff.

I discovered my direction and my drive.

There is so much, far too much to post in one article.

If you’re interested, I’ll be breaking it all down, piece by piece in future articles. It’s not all pretty stuff. I’m not worried about you judging me. If you walk away thinking, “well, I”m better than that guy,” then I’m glad. I’ve added a positive to your life. I’m not trying to be better than anyone except better than the guy I was yesterday.

But let me tell you at least a few changes I made and the outcome.

When my CEO called me back to work, I told him no. Yes, he was surprised that I would refuse a global VP position (so was I.)

I didn’t want that job. I had already been there in this job and the last. I am a foremost expert in my field (not my words), and I wanted more than yesterday. More responsibility, more autonomy, more creativity . . . More money.

He’s great guy and a great CEO. I was not threatening him. I was being honest. I knew my value, and I knew my goal toward career fulfillment.

He offered me President and CMO.

I gratefully accepted, and I’m fulfilled, helping him expand our global organization.

But that risk inspired other risks.

I’m all in on being an Author. Funny, since I’ve written four novels so one might say that I’m already all in. But I wasn’t. Not really. The work is great, and I’m proud of the books. But it’s no longer just a hobby. It is something I am. An author is different than a writer. Once I discovered why I wasn’t trying to be an author, it was easy to decide that I wanted to be one (Sorry, I’ll share all that in another post).

And finally, I talked with my estranged wife. A real talk, not the ones we’ve been having on the phone for the past year. We agreed that the things that broke can’t be fixed. That even if they could be, the boxes we don’t check off for each other are things we can’t happily live without.

We talked about the past, the great times, raising our children, learning from one another, and how fond all those memories will forever be. Ours is a friendship that will never end, but the marriage had to, and now it has.

I think there was a relief in that honesty for both of us.

In all, I’ve discovered that I don’t know anything.

And that is wonderful because it leaves me open to all the potential opportunities as I journey onward seeking fulfillment.

3 thoughts on “Seeking Fulfillment: Knowing Nothing Taught Me Everything”